From Gangplank
Jump to navigation Jump to search 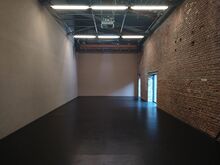 Tanzhalle Wiesenburg is a place for artistic research, creation and interdisciplinary collaboration with a focus on stage productions. Alternative to institutional structures, this special cultural place is based on a diversity of competences, common sense and self-organization within the team, working closely with the hosted artists. We aim for enabling continuous and fluid work-processes, and supporting practical and theoretical exchange. The artistic and social aspects of these exchanges expand into interactions with the public. Tanzhalle Wiesenburg (opened 2012) is an important actor within Die Wiesenburg, a historically significant former homeless shelter now dedicated to culture and craft.

For the development of an empty ruin into an art space on the site of Die Wiesenburg [2] in Berlin-Wedding, Wiesen55 e.V. succeeded in acquiring funding from the program Soziale Stadt Berlin in 2010. That allowed us to create a working space dedicated to dance, visual arts, lighting design, architecture, cultural management and dance pedagogy, securing a continuity in the diversity of our practices, and facilitating creation and production processes. From its opening in 2012 Tanzhalle Wiesenburg empowers artists, designers, musicians, technicians and many others to carry on working despite the changing production circumstances. It promotes continuity versus project-oriented work – the idea of continuous work processes and of work as a pathway. The site of Tanzhalle Wiesenburg provides a peaceful work environment in the middle of Berlin, allowing for immersion into training, practice and research, enabling to concentrate on the creative process.